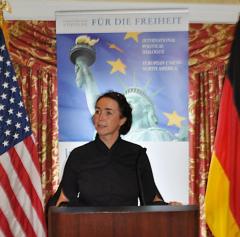 Intelligence sharing has always been a highly sensitive area of transatlantic relations. The recent revelation of the National Security Agency’s (NSA) surveillance program PRISM in June 2013, namely the case of Edward Snowden, has brought to light unsolicited inter-governmental collection of information.  These revelations concerned publics on both sides of the Atlantic as even the closest of alliances were not free from accusations of spying. This has led to a renewed debate over the legality of government surveillance on both sides of the Atlantic and has aroused anger and curiosity in Germany as well as in the US.  Besides, these current issues are likely to affect the negotiations to the Transatlantic Trade and Investment (TTIP) partnership or even the upcoming federal elections in Germany.

Angela Freimuth personally is deeply concerned about any form of data collection – private or public. Believing in what she calls “information self-determination” she feels that any form of amassing data provides an opportunity for a leak. While she understands that data collection can be useful for circumventing potential risks, she asserted that traditional investigations provide a more legal means to what often are similar ends. Angela Freimuth emphasizes the need for both domestic and cross-Atlantic debate about informational self- determination of human dignity, freedom and democracy.

The Deputy Chairwoman of the FDP Parliamentary Group in the State Legislature of North Rhine-Westphalia also showed a possible impact on recent polls in Germany’s upcoming elections for the Bundestag in September, not significant but still considerable. Freimuth further underlined that especially for Chancellor Angela Merkel, this has been the first incident which could bring her into trouble and burden her credibility. But there is high uncertainty or even doubt about whether these events could really influence the federal election results in the end, Freimuth explained.

The audience did not need to cross the Atlantic to engage in debate as a lively discussion followed Freimuth’s lecture. While cross-Atlantic discussion is necessary, Freimuth clarified her statement noting that nations do not need to create legislation regarding data collection. Rather, she emphasized that the discussion should extend outside of the political circles of Washington and Berlin and expand to the common citizen. The delicate balance between freedom and security is not easily resolved but should involve a wide discussion. The need for dialogue remained a key component of the discussion as attendees even questioned each other. While one attendee commented that there exists a difference between government and private sector data collection, another attendee rebutted, asserting that such a notion was a “20th century concept”. As Snowden was a private contractor for the U.S. government, one sees how the lines of the private and public sector often become blurred. While the talk on the 26th did not solve the issue of data collection, it planted the seeds for further debate on both sides of the Atlantic. (FNF 09/04/13)