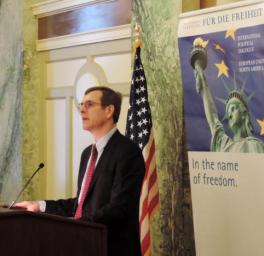 Christoph von Marschall, Chief Diplomatic Correspondent and former U.S. Correspondent at the Berliner Tagesspiegel, and long-time observer of U.S. politics, addressed the different responses and reactions to the NSA revelations on both sides of the Atlantic at a discussion hosted by the Transatlantic Dialogue Program of the Friedrich Naumann Foundation for Freedom.

Von Marshall emphasized that the high degree of outrage in Germany can only be understood against the background of the Bush-presidency: political expectations were low for George W. Bush, while Barack Obama promised fundamental change.  However, Obama has not proven to be a “political messiah”, but rather a “pragmatic mechanic of power”.  The disconnect between promise and delivery yielded disappointment in Europe –especially in Germany.

Von Marschall, too, felt disappointed. His disappointment stemmed not only from Obama’s politics but also Germany’s reactions to the scandal. In Germany the NSA-revelations raised anti-American feelings and prejudices. When people talk about “digital occupying forces”, von Marschall proposed that we should ask ourselves which deeply rooted stereotypes have been touched. Von Marschall expressed disappointment at the US public as well as the obvious crossing of borders of legitimacy by the NSA had caused little concern. The actions of the NSA also reflect a shift in mentality in the post-9/11 world. For example, NSA-director Alexander and National Intelligence Director Clapper lied to parliament. Before the 9/11 attacks, such actions would have led to calls for resignation, but today, people merely take note of such behavior.

The differing attitudes between the US and German publics towards their respective state and military plays an important role in explaining the differing reactions towards the scandal. Von Marschall pointed out that the US public tends to trust the US Secret Services and place less faith in the federal government while the German public presents the opposite picture.

Data privacy is a perfect example of these differing attitudes. Von Marschall recalled German outrage against a population census in the 1980s. The Federal Constitutional Court responded to the outrage in 1983 by determining the basic right of informational self-determination in support of the census. Over 20 years later, data preservation remains highly controversial in Germany despite European Union laws allowing for the preservation of data for six months. Meanwhile, in the United States, the desire for security trumps the need for data protection. As a result, the US-government is building large databases to contain communication data for years with little public outrage.

New technologies, such as Google Street View, also display cultural differences towards data collection. Americans, for example, tend to welcome street view as it presents a novel way to show friends their homes and neighborhoods while Germans feel uncomfortable that a stranger could view their homes via the Internet. Von Marschall highlights that Americans view technological innovations with an emphasis on problem solving while Germans generally point out risks and remain skeptical.

Von Marschall emphasized that one should not overrate the impact of the NSA-scandal for the German citizen. In the elections for the Bundestag, the revelations and the reaction of the federal government did not play an important role. A survey by Allensbach revealed that three quarters of the German citizens did not feel personally threatened; only one in four Germans expressed some concern. The agitation was limited, and the German media showed much more sensitivity towards the revelation than the citizens themselves.

Von Marschall harshly criticized the way American politicians managed the scandal, especially when they delivered statements like “Espionage? Everybody does that!”. Such statements were counterproductive in diffusing the situation. The claim that a number of attacks were prevented cannot be proved and largely turns out to be exaggerated and only further damaged US credibility. The halfhearted reactions or even non-reaction of US-politicians increased German resentment.

Finally, von Marschall said there is little hope that president Obama can induce fundamental changes to the NSA’s practices. Corrections are most likely to be taken by the Congress or the judiciary. Altogether, the NSA-revelations caused a severe crisis of confidence in German-American relations. Claus Gramkow, representative of the FNF for the US and Canada, related to that statement in his closing words when he said: “Continuing the transatlantic dialogue in times of tensions is even more important!” (FNF, 20.01.2013)