The Friedrich Naumann Foundation for Freedom’s Transatlantic Dialogue Program was pleased to welcome Andrew Cohen, Director of Communications, Pew Research Center; Jacob Heilbrunn, Editor, The National Interest; and Hans H. Stein, Director European and Transatlantic Dialogue, Friedrich Naumann Foundation to a panel discussion on ‘Germany and the U.S.: Reliable Allies?’ at the beginning of June. The discussion focused on a recent Pew Research study “Germany and the United States: Reliable Allies” which examined the way Germans and Americans view their transatlantic partnership. The survey, summarized by Andrew Cohen, showed that a majority of both Germans and Americans view the U.S./Germany as a reliable ally. Additionally, more than fifty percent of Germans favor strong ties with the U.S. over Russia. Equally important, a majority of Germans believe that President Obama has successfully managed the German-American relationship. Citizens from both nations believe that a focus on domestic issues should come before increased engagement on an international scale.

However, not all aspects of this transatlantic relationship are seen eye-to-eye by Germans and Americans. Most Americans view World War II and the Holocaust as the most important event in the relationship, while a majority of Germans see the 1989 fall of the Berlin Wall as a critical development. Furthermore, Americans believe that Germany needs to play a more active military role globally, while Germans disagree. Finally, most Americans believe that the EU needs to take a firmer stance on the issue of Ukraine, while Germans believe it is being handled properly. 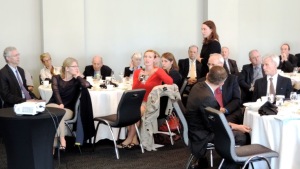 These findings, and others of the study, led to an interesting political debate on the meaning of these opinions on both sides of the Atlantic. Hans Stein pointed to a sense of romanticism in German society with regards to President Obama, who has seen approval ratings as high as eighty percent in the country, as a potential reason that the relationship between the two countries is more of a “love attachment” than a true partnership that, admittedly, has its ups and downs. He also highlighted a larger problem in the German-American relationship: that the model of U.S. society is often seen as not at all beneficial around the world. Germans view the U.S. as having high inequality and high crime rates, and see many Americans as hectic and superficial. Despite the fact that Germany and the United States have many shared values, according to Stein, there are many factors in German society that prove an underlying sense of anti-Americanism and a fear that Americans may try to undermine European standards and regulations. This skepticism and the current situation with Russia has also led to a renewed debate on whether or not Germany is more connected to the East or the West – and as Germans start to become ‘normal’ within Europe, they also become more skeptical and inclined to put their national interests first.

Jacob Heilbrunn pointed to the highly unpopular Bush Administration as a starting point for German skepticism of American politics. He also identified the aggressive policies of Vladimir Putin as a trigger that has reanimated the transatlantic security alliance, particularly NATO. According to Heilbrunn, anti-Americanism is less concerning because while it will always be a presence, it is difficult to define, and the opinions of younger generations (who tend to be less inclined to be involved in other countries) will change the political landscape of the relationship even further. With regard to the debate of East vs. West, Heilbrunn argued that Germany should avoid juggling between sides in an effort to strengthen their power from a foreign policy standpoint. Similar to many Americans, Heilbrunn agreed that Germany needs to strengthen its military.

The panelists also discussed the role of history in the German-American relationship, particularly focusing on the Pew finding that a majority of Americans view the Holocaust and World War II as the most critical historical moment for the partnership. Heilbrunn highlighted his view that these two events were in many ways separate, particularly from the standpoint that the Holocaust was not the United States’ primary reason for entering the 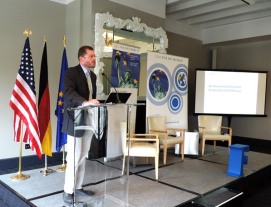 Due to the importance of Germany in Europe, the country should stop being a reluctant leader and instead become a more open partner in leadership as the feeling in Washington is that there is more to be expected.

Germany’s military role in both Eastern Europe and the Middle East will continue to be an important factor in the transatlantic relationship. Both economically and geopolitically, the German-U.S. relationship continues to be the key bridge in transatlantic relations. Based on the findings of the poll and the panel discussion all participants agreed that fostering dialogue and debate between the two nations is critical to a stronger global presence for both the U.S. and Europe.