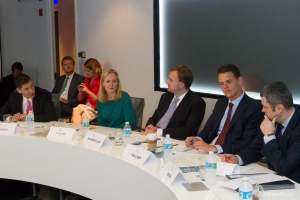 Unlike any other bilateral trade agreement, TTIP has stirred emotions on either side of the trade debate. The diversity of views over TTIP in Europe reflects the EU’s diverse member states, but also a Union which is only now coming to grips with its own role as a global trade negotiator. The nuances of the intra-EU TTIP debate can be hard to grasp for even the savviest European trade expert, and for US counterparts in Washington the plethora of views from Berlin to Paris and from Rome to Sofia can be mystifying. With this in mind, the European Liberal Forum (ELF) accepted the invitation to host an intimate Ralf Dahrendorf Roundtable in Washington DC to deconstruct the European TTIP debate to an audience of US and European stakeholders. The event was hosted on the fringes of the annual Transatlantic Week gathering, capitalizing on an array of interesting TTIP voices. ELF brought together representatives from Europe’s two largest political groups, the Christian Conservatives (EPP) and Socialists (S&D) as well as the Liberal Group, widely considered as the European Parliament’s Kingmaker. Adding insight on the progress of negotiations, Member of Cabinet of EU Trade Commissioner Cecilia Malmström, Christian Burgsmüller, joined our party political representatives for a two-hour exchange on TTIP from the vantage point of the EU. The event was organised with the generous support of ELF member organisation Friedrich Naumann Foundation for Freedom and AT&T.

Who’s in Favour of TTIP?

European voices on TTIP are a mixed bag. Overall, according to Pew Research, 58% of EU citizens favour concluding a trade agreement with the US, although polling could change as negotiations proceed. US support for TTIP is roughly equal and so there does seem to be some truth to argument that a “silent majority” on both sides of the Atlantic supports a deal. However, in the EU, three outliers mean that the picture is less rosy. Austria, Germany and Luxembourg feature with approval ratings of around 40%. Especially for global export leaders such as Austria and Germany, these sorts of figures are surprising. The anti-TTIP camps in both countries have however managed to mobilise thousands in opposition to the negotiations, instrumentalising fears of US GMO crops and Investor-State Dispute Settlement (ISDS) Mechanisms. Unlike in the US, where polls show that young people are more positive to TTIP than older citizens, there does not seem to be a similar age gap in the EU. On the party-political spectrum in the EU, the two largest groups in the European Parliament (EPP & S&D) are both fundamentally in favour of a TTIP agreement with the US, although recent moves by S&D TTIP Rapporteur Bernd Lange to postpone a vote on TTIP shows us that the S&D is divided on the issue. The Liberal ALDE Group has also expressed strong support for TTIP, with Group spokesperson Marietje Schaake MEP pointing out that “We need the EU and the US to work together to set higher standards worldwide when it comes to food safety, the environment, health or labour.” Opposition has primarily been voiced by the Green Group, as well as an array of far-right and far-left representatives, but for the legislative majority of the European Parliament, TTIP is on track.

TTIP: Birthing Problem for the EU

The TTIP debate is, however, much more than a discussion on trade. It goes to the core of the division of competencies between the EU and its member states. Although the EU has the power to negotiate agreements on behalf of its member states, there is significant scepticism, especially in Europe’s economic powerhouse, Germany, with having trade agreements negotiated by others than the German government. Questions still abound on the democratic legitimacy of nascent EU institutions, including the European Commission and Parliament, and a 2014 poll by Pew shows that only 28% of Germans want the EU to negotiate trade agreements on their behalf, while 65% of those polled preferred leaving this prerogative to the German government. As the first trade agreement of such magnitude negotiated by the EU, TTIP has put fuel on fire to the debate around EU trade prerogatives. The debate surrounding TTIP in many ways echo the Common Market debate in Europe, including fears of foreign agricultural products flooding domestic markets and decision-making being moved to institutions further removed from the people. One lesson learnt from this parallel is one which is repeatedly voiced at TTIP discussions throughout Europe: TTIP proponents need to re-capture the TTIP debate by telling the stories of the benefits TTIP has in store for the people of the EU.

The transatlantic relationship is founded on shared values and history, but as the generation born after the end of the Second World War reaches retirement, a new generation of millennials are arriving on the stage. In Europe, unlike their baby-boomer predecessors, the cultural ties to the US are not always as present as in the past. Globalisation, travel and emerging markets have meant that young Europeans are exposed to a host of cultural influences from around the world. The transatlantic connection is not as self-evident today as it was at the pinnacle of the Cold World. If TTIP succeeds in easing the flow of goods and services across the Atlantic it might be one piece of the puzzle in cementing the transatlantic relationship. 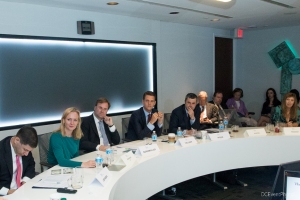