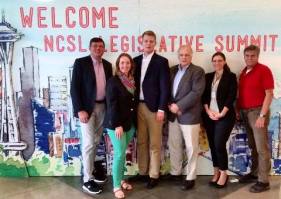 A joint delegation of the Wolfgang Döring Foundation (WDS) and the Friedrich Naumann Foundation for Freedom (FNF), consisting of German state legislators and representatives of the two Foundations, attended this year’s National Conference of State Legislatures (NCSL) Legislative Summit. From August 3 – 6, 2015 legislators and legislative staff from all US states gathered in Seattle to discuss economic, social and political developments on state-level at the nation’s largest gathering of this kind. In addition, legislators from all over the world as well as business and think tank representatives used the opportunity to get in touch with their US counterparts and learn about their challenges and – most importantly – how to solve them.

The first day of the summit kicked off to a great start with an intensive discussion about immigration and innovations in immigrant integration as state legislators constantly work on developing appropriate approaches for their respective states. The legislators and participants discussed new ways to strengthen skills of immigrant workers and support business development by immigrant entrepreneurs on the federal- and state-levels.

Another hot topic in the US is the legalization of marijuana. As several states move forward with medical and recreational marijuana legalization policies, the battle for control of marijuana law intensifies among federal, state and local governments. While the largest portion of the participants predicted a bright future for marijuana legalization on the state-level (rather than federal-level), there are still important issues that need to be clarified. Among them: the protection of minors, licensing businesses, regulating practices and products, enforcement, and more.

The workshops and debates surrounding education focused on the importance of early-childhood education and investments in children’s health on one hand and the targeted training of principals and teachers on the other hand. On the international level, discussions focused on the importance of international comparisons of student achievement as the US lags behind other industrialized countries and has room to improve its education system.

Against the backdrop of ongoing trade deals between the US and several Pacific Rim countries (Trans-Pacific Partnership) and the US and the EU (Transatlantic Trade and Investment Partnership) another session was devoted to the impacts of trade and export and their implications for US states. In addition, the importance of working infrastructure, which is necessary to remain competitive and reach trade goals, was highlighted.

As our society develops at the speed of light, different panels and working groups throughout the summit focused on innovation, new technology, the economy, and the question of how technology can be used to maximize government productivity, achieve cost savings, and help strengthen business innovation.  Cloud computing was named as an example that can offer many benefits and cost efficiency, but one that also brings challenges when it comes to data privacy.

The participants also had the honor to listen to a keynote address delivered by Robert Gates who served as Defense secretary under both Presidents George W. Bush and Barack Obama. Commenting on the Iran Nuclear Deal Gates underlined that he is not happy with the deal closed between the P5+1  and Iran. However, he argues that Congress needs to ratify the deal: “Despite a flawed agreement that has alienated nearly all our friends in the region, we must deal with the Iranian agreement we have, not the one we wanted. We must now face the reality that there are serious consequences to voting down the agreement or pulling out.”

The issues that were discussed during the summit will continue to play a large role not only within the US but also on the international stage and for the transatlantic dialogue. The direct exchange of thoughts and ideas between legislators, opinion leaders, and multipliers from all over the world is crucial to the facilitation of learning from one another. NCSL’s legislative summit is an important platform for that exchange.