The topic of immigration is a matter of urgency in politics due to huge flows of refugees entering Northern America and Europe every day and the necessity of a solution to solve demographic problems. The panel on ‘Immigration and Integration – Cross-country Comparison of Systems’ at the TAD’s Transatlantic Conference discussed the debate surrounding immigration issues. The perspectives presented to the audience comprised a cross-country comparison of the German and Canadian systems and highlighted current developments in the USA. The aim of this discussion was to introduce the major conflicts these countries currently face when it comes to immigration policy.

Johannes Vogel, Secretary General of the Free Democratic Party State Party of North-Rhine Westphalia in Germany, opened the panel by presenting the current immigration situation in Germany. He focused on the urgent need for workforce enhancement through immigration. Until a decade ago Germany had not seen itself as an immigration country and it is still not recognized as one globally. Migrants are not aware of the fact that Germany has one of the most liberal immigration systems today. Therefore, few migrants decide to go to Germany for work, despite the fact that their workforce is strongly needed due to an aging population and demographic problems. Over the next 20 years at least 250.000 immigrants per year are needed to balance the shrinking number of Germany’s working popu 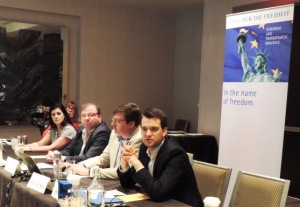 lation. Thus, Vogel referred to highly skilled workers coming into the country as a “positive force” and pointed out that Germany needs to change its immigration policies further to attract more skilled migrants. His main suggestion for a policy change is the introduction of a point system, which is used by traditional immigration countries such as Canada or Australia, to promote Germany as an immigrant-friendly country. Additionally, active recruitment in foreign countries and the development of a welcoming culture through the support of the German government and agencies is needed to attract potential immigrants.

The situation in Canada, as presented by Andre Albinati, Principal of the Earnscliffe Strategy Group, focused on a disparity in Canadian policy. On the one hand, Canada has a restrictive asylum policy in response to the high number of asylum seekers. The country tries to reduce the number of temporary foreign workers who are mostly unskilled and seen as taking employment from Canadians. On the other hand, Canada acknowledges the importance of pluralism and introduced programs such as the ‘Canadian Immigrant Integration Program’ (CIIP), which aims to help immigrants to integrate into society and the job market more easily; the ‘Easy Excess Program’, which allows applicants to enter Canada through an expedited visa process; and the ‘Canadian Multiculturalism Act’, which aims to preserve and strengthen multiculturalism in Canada. This contradiction illustrates that Canadian immigration policy favors highly skilled workers with the potential to help benefit Canada’s economy and society. In addition, Albinati pointed out that various conflicts such as credential recognition, the decentralization of Canada, and unemployment among immigrants are major topics in the upcoming election this year. To provide a more positive outlook, he presented the results of field research demonstrating that Canada’s society feels fairly comfortable with immigrants.

Canada’s neighbor, the USA, struggles with an influx of undocumented immigrants who do not have a resident permit. An estimated 12 million unauthorized immigrants reside in the United States. The various reasons for emigrating include family reunification, economic opportunity, and/or persecution in the immigrants’ home countries. The major concern regarding this situation is the abundance of businesses and organizations that, professionally and with a huge profit, smuggle people across borders. It is not only dangerous to enter the US through smuggling routes, is also very expensive and it is difficult to leave the vicious networks after the journey. While the liberal view on immigration supports the free flow of individuals, talent, and workforce, illegal immigration causes a major problem due to the corrupt and vicious profit businesses that are established based on demand.