The security and defense session offered three different perspectives on NATO by experts working in the areas of security and defense policy. Peters, Pfeifle, and Pindur contemplated the future of the Alliance in the next century, the strategic challenges facing Germany, Europe, and the US, defense spending responsibilities, and the state of German military capabilities.

Session 4 Summary – “One for All – All for One: How can NATO Remain Fit for Purpose 70 Years After its Birth?” 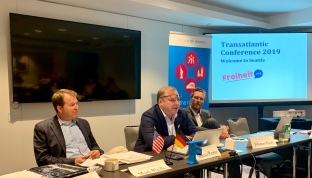 The first session of Day 2 offered three different perspectives on NATO by experts working in the areas of security and defense policy. Peters, Pfeifle, and Pindur contemplated the future of the Alliance in the next century, the strategic challenges facing Germany, Europe, and the US, defense spending responsibilities, and the state of German military capabilities.

Americans and Europeans established NATO after World War II to “keep the Soviet Union out, the Americans in, and the Germans down,” as Lord Ismay, the alliance’s first secretary-general, put it. Now, 70 years later, how can NATO remain fit for purpose? Peters contended that NATO must strengthen its old, high-end capabilities that have atrophied over the years and its interoperability. Annual exercises should also be conducted in the region to flex an assertive military muscle, or two, in the face of a rising Russia. Pfeifle added that NATO needs to enhance its strategic, operational, and technical capabilities to defend against future cyberattacks and find new and innovative ways to reach the 2% defense spending target, perhaps by spending less money on hard military elements and investing more in soft power activities, as these are equally as important to securing peace and prosperity. The overall consensus among the panelists was that the enduring and evolving nature of the security environment demands that NATO continues to adapt if it wants to respond appropriately in the future.

The burden sharing disagreement among Alliance members has always simmered, and it was also a hot topic of discussion during this session. Why has Germany been so reluctant to spend on defense? Referencing Robert Kagan’s recent article in Foreign Affairs and drawing on history to inform the present, Pindur suggested that perhaps Germany is too fearful to act as a world leader. Another possible explanation is a transactional one: you are less likely to spend money on defense if you do not feel a threat. Germany, surrounded mostly by friends since the end of the Cold War, doesn’t feel a threat quite yet and is therefore less likely to invest in defense at a time of peace.

However, Germany can’t rely on the willingness of the US to always carry the brunt of the burden, much like it can’t exclude the possibility of President Trump deciding to pull out of NATO entirely. Therefore, as Pindur argued, Germany needs to commit to a more robust defense scheme. To stress his point, Pindur explained how German military capabilities have been declining, both in quantity and quality, since 1989. Germany’s military readiness is at an all-time low, the Bundeswehr is in questionable shape and needs to be equipped better, and Germany, it seems, is always operating at its limit. Aside from the internal issues hampering German defense capabilities, Peters outlined six other strategic challenges that Germany and Europe need to tackle when it comes to NATO. These include: Russia, Radicals, Refugees, Recapitalization, Recruitment & Retention, and Trump.

During the Q&A session, participants voiced their frustration that too much time is spent in political circles discussing the defense spending issue, that the conversation on what NATO’s fundamental mission is and should be in the future is entirely lost. Should its primary purpose remain to defend the territory of its members against direct attack? Should the Alliance aim to extend security and stability throughout the Euro-Atlantic region?

Other participants were curious to know what the possibility of a European army/navy might be. All panelists agreed that such an entity will not form any time soon. A European defense force would need to have its own budget, and any European national parliament would be highly reluctant to give up parts of its own budget to finance such a project. Similarly, NATO expansion is not on the horizon.