Member of the Bundestag Torsten Herbst provided participants with an overview of the German political party system, evaluated the political situation in Germany after the most recent European Parliament and state elections, and analyzed what the election results could mean for Chancellor Angela Merkel’s grand coalition.

Speaker:
Torsten Herbst, Member of the Bundestag, Chair of the Committee on Transportation and Digital Infrastructure, Berlin, Germany

On the final day of the conference, Torsten Herbst provided participants with an overview of the German political party system, evaluated the political situation in Germany after the most recent European Parliament and state elections, and analyzed what the election results could mean for Chancellor Angela Merkel’s grand coalition. 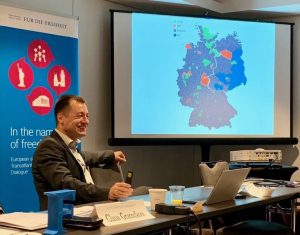 Germany’s two major parties, the Christian Democrats (CDU) and the center-left Social Democrats (SPD), slumped in the European Parliament elections, as voters migrated from the traditional political center to the Greens. Merkel’s CDU and the allied Bavarian Christian Social Union managed to win a combined 28.9% of the vote, down 7 points from the European Parliament election in 2014, and their worst result in a nationwide election ever. Merkel’s junior coalition partner, the SPD, only received 15.8% of the vote — an 11-point drop from its 2014 result — putting it in third place, behind the Greens. The SPD also suffered a historic defeat in the regional election in Bremen, Germany’s smallest state held by the Social Democrats for 73 years.

What do these results mean for the grand coalition? Herbst explained that the SPD’s decline could accelerate Merkel’s departure, especially if the party’s left flank’s dissatisfaction with the coalition continues to grow. Should the SPD’s left wing win the internal power struggle, there’s a chance that the party will walk out of the coalition with Merkel, triggering new elections before 2021.

Much like it did throughout Europe, a “green wave” swept across Germany, pushing environmental issues to the top of the political agenda. The Green party scored its best result, winning more than 20 percent of the vote and nearly doubling its 2014 result. While the Greens have been part of the country’s political scene for decades, their demands have moved to the center of the debate, with close to half of German voters naming climate change and the environment as the biggest issue. According to Herbst, a change in leadership, better platform messaging, and a new-found popularity among young voters are behind the Greens’ strong performance.

The FDP a Small Winner

Herbst stressed that the political landscape is becoming more and more fragmented in Germany. This means that three to four parties are now often needed at the state level in order to form a coalition government. In the European Parliament election, the FDP expected to obtain between 7-8%, but it only reached 5.4%, gaining, nevertheless, two additional seats in the European Parliament since the 2014 election. The FDP is currently working on developing a new narrative beyond its “comeback party” one of the previous German Federal elections in 2017.

A Loss for the AfD

Ahead of the European Parliament elections, the far-right populist Alternative for Germany (AfD) party had been advocating leaving the euro zone and even, potentially, the European Union entirely. However, its Eurosceptic platform did not win it all that much support.  With 11% it did better than in the 2014 European election, but worse compared with the 2017 German general election. Herbst contended that the AfD did not fare better than expected because it faced a lot of headwind ahead of the election, including a party finance scandal, its close alliance with the Russian regime of Putin, and the eruption of a new scandal involving Austria’s extremist Freedom Party, which showed the dangers of allying with the far right. Herbst believes that the combination of these incidents vividly illustrated to voters the darker side of the populist movement and likely compelled Germans to vote for Pro-EU parties instead. Germany’s border areas, however, remain successful hubs for the AfD, in part because crime tends to be higher there and the party runs on a platform to close all borders.

Germany also saw a significant rise in voter turnout, which was estimated at 61.5 percent, up from just 48.1 percent in 2014.